Today I succeeded in running my Truffle unit tests inside IntellIJ IDEA. Let me tell you how I did it, so that you can use it yourself. Warning: it does involve some hacky workarounds. I’ll close this post with a request to the Truffle people about how running the tests would work ideally.

Please note that I’m using TruffleDevEnv for my Truffle development. I’m one of the maintainers of it, and we added the IntellIJ run configuration to TruffleDevEnv. Below I describe the steps you need to take if you want to do this yourself in some other context.

When you run truffle test, a few things happen:

As node options, I used: -r truffle/cli truffle test. This will cause the Truffle cli running code to be included, and then truffle test is passed as command line arguments to the CLI, just like they normally are.

If you run the tests now, you will see that the contracts are compiled, but the tests are not actually run. The problem is that IntellIJ IDEA adds a few more command line options (ui and reporter), which are now passed as input to Truffle, causing it to misunderstand them as a specification of the tests that need to be run. The only way I found to fix that, is to configure the test files explicitly in the run configuration.

Ideally, you’d want to type test/**/* or something along those lines, but as it turns out, the wildcards are not expanded. So I had to manually put in all test source code files there. Definitely not what you want, but I couldn’t find a better way so far. 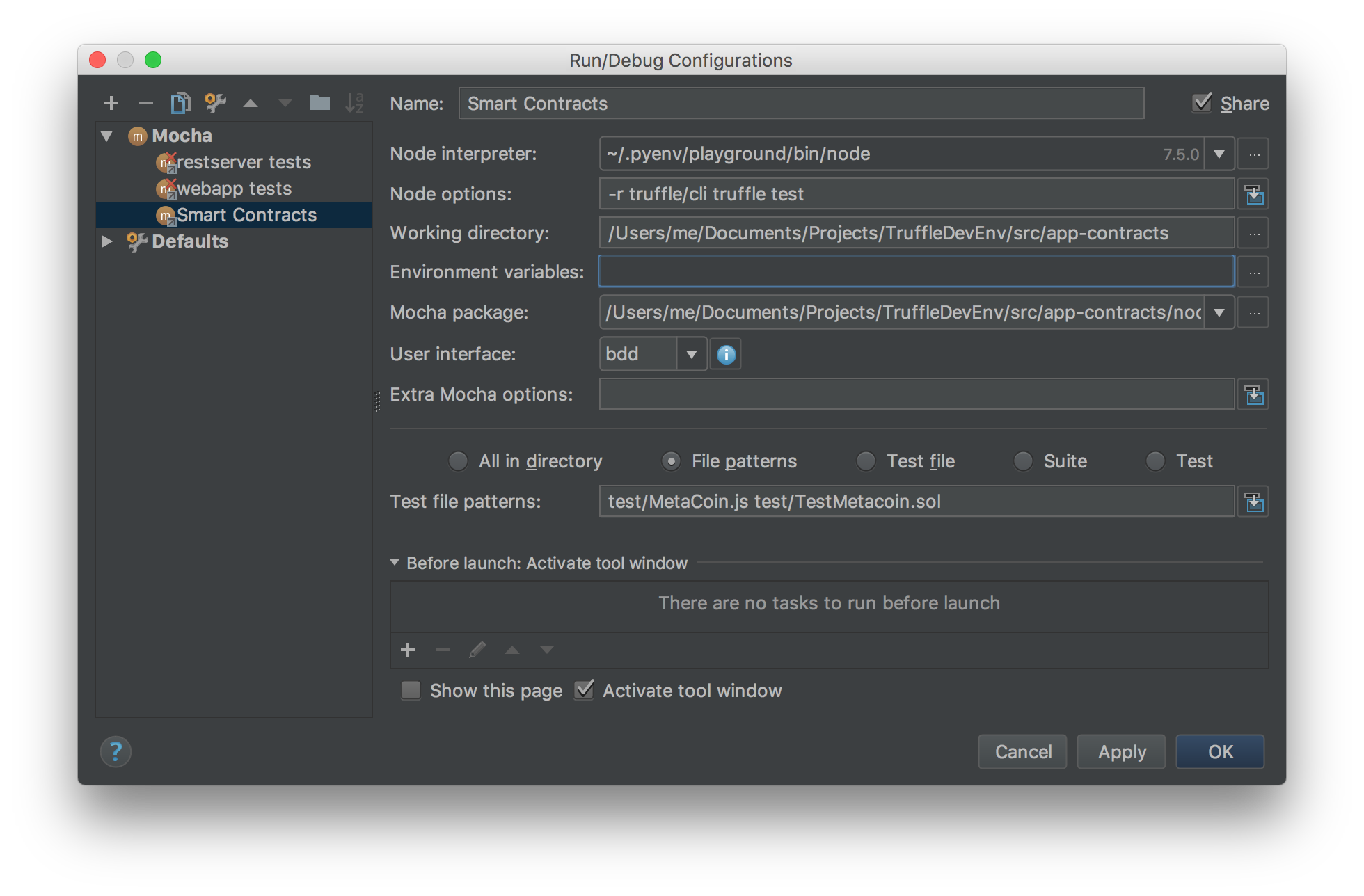 The shell command that IntellIJ IDEA creates, contains a ‘reporter’ parameter. That is normally used by Mocha and will cause it to generate output in the format that IntellIJ IDEA expects and can parse. Because of our changes, this parameter no longer ends up in the Mocha options.

Fortunately, Truffle allows (some) customization of Mocha by adding a section for it in truffle.js. I put the following code in there.

This causes Truffle to detect that there is a command line parameter --reporter (1). If it is found (2), then the reporter is added to the Truffle options (3).

What’s causing all this headache is the fact that on the one hand IntellIJ IDEA expects to be able to call mocha and pass command line parameters to it. Whereas on the other hand Truffle requires tests to be run using its own command line utility truffle test.

I’m by no means a mocha expert, but I have also used it like this:

This causes Babel to be used to process the test sources before the tests are run. I don’t know enough about it to be sure, but I would hope this mechanism to be powerful enough to allow the Truffle logic to be added as well. So maybe something like this:

It would be awesome if the Truffle developers could look into this and maybe fix it a much better way!